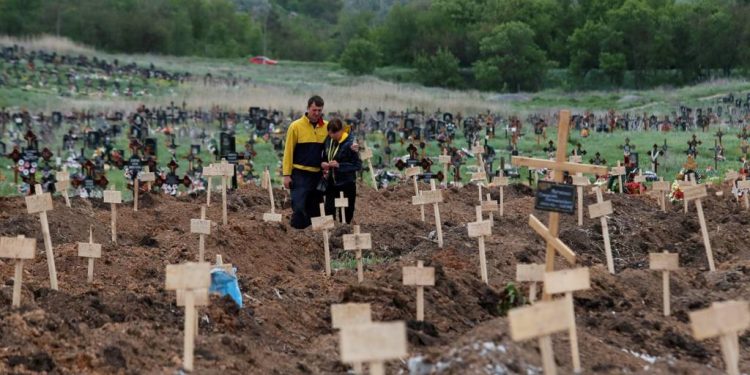 If you’re just joining us, here are some of the key happenings in Ukraine and beyond:

Russian diplomat resigns over war: Boris Bondarev, Moscow’s counsellor to the UN in Geneva, resigned earlier over what he called the “absolutely needless” and “criminal” conflict in Ukraine. Bondarev – now Russia’s most senior diplomat to defect over the war – accused “those who conceived this war” of wanting nothing more than “to remain in power forever”.

Harsher sanctions: Ukrainian President Volodymyr Zelenksy told global business and political leaders at a summit in Davos that “maximum” sanctions must be used against Russia. The measures he wants to see put in place, he said, are: a full embargo on Russian oil, all Russian banks barred from global systems, and all trade with with Russia abandoned

Ukraine and Russia butt heads over ports: Ukraine’s deputy PM, Yuliia Svyrydenko, has called on world leaders to help lift the current blockade on its Black Sea ports so the country can resume its vital export of grain. Kremlin officials have said they will only consider the move if sanctions imposed on Moscow are reviewed, according to the Interfax news agency.

Erdogan appreciated the results of the Brussels meeting