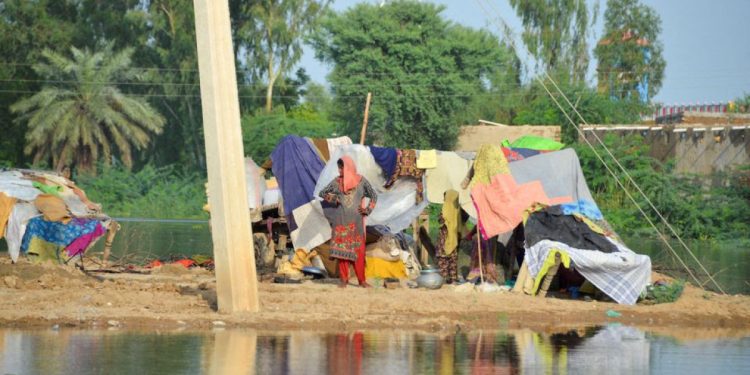 The southern Pakistani province of Balochistan has suffered hundreds of millions of dollars in economic damage due to devastation from flooding as damage to highways hampers relief efforts, the province’s chief minister said on Monday, APA reports citing Reuters.

In the north, residents and officials said villages were almost entirely cut off from the rest of the country due to destruction wrought by heavy rains.

The unusually strong monsoon rains have caused devastating floods in large swathes of the country, affecting more than 30 million people and killing more than 1,000, and straining official relief and rescue efforts.

The Chief Minister of the southern province of Balochistan, Mir Abdul Qudoos Bizenjo, told reporters the province had suffered more than 200 billion Pakistani rupees ($900 million) worth of damage from the more than two months of flooding.

“We are facing a lack of financial resources, tents and other relief goods and connectivity as all major highways is badly damaged … hampering our relief efforts,” he said, adding that his province needed more help from federal government departments to cope.

Pakistan’s foreign minister told Reuters on Sunday the country needs financial help to deal with “overwhelming” floods, adding that he hoped financial institutions such as the International Monetary Fund would take the economic fallout into account.

Some initial analyses by economists have put the cost of the damage at $4 billion, though the foreign minister said it was likely higher.

Britain’s Queen Elizabeth on Monday said in a message of support to Pakistan Prime Minister Shehbaz Sharif: “My thoughts are with all those who have been affected, as well as those working in difficult circumstances to support the recovery efforts.”

In Pakistan’s northern Kyber Pakhtunkhwa province, the Swat Valley – home to millions of people – was largely cut off from the rest of the country due to damaged infrastructure and flood waters. Local residents said food and medicine was running out and they had little access to power.

Pakistan has appealed for international support and some countries including Turkey have sent supplies and a rescue team.